Are you looking for an XCMG Boom lift for sale? Xuzhou Construction Machinery Group Co., Ltd. (XCMG) offers a variety of different boom lifts models. The company is a leader in the machinery industry and has developed quality and modern state-of-the-art boom lifts. The company’s headquarters is located in China, with several manufacturing plants and service outlets available globally.

XCMG offers the two advanced types of Boom lifts, namely the Articulating Boom Lifts and the Telescopic Boom Lifts. If you want to purchase an XCMG boom lift, read on to know the current model lineup, features, capacity, and prices for the available XCMG boom lifts.

What is an XCMG Boom Lift?

XCMG Boom Lifts are a type of aerial lift. The boom lifts comprise a grounded base supported by a hydraulic system capable of powering and maneuvering a crane and a platform of obstacles needing clearing. Boom lifts can extend to the higher-level ground; they can lift materials and personnel to higher heights. XCMG boom lifts are also very flexible; they can be attached to a van or truck, enabling easy transport.

Boom lifts are of two types.

Also referred to as telescopic boom lifts, straight boom lifts comprise a platform connected to a telescopic extension arm. The arm is limited in its maneuvering capability because it lacks hinges. However, telescopic boom lifts are very stable and can reach the highest height capability of aerial lifts. The hydraulic arm enables the bucket to move up and down between 50 to 180 feet. The booms carry between 400 to 1000 pounds, depending on a particular machine.

Articulating booms comprise multiple sections or hinges to bend the extension arms around obstacles. The articulating booms may not reach the heights of the telescopic booms, but they serve perfectly for hard-to-reach areas. These types of booms can fold more easily and can serve for both indoor and outdoor use. The booms can reach a capacity of between 40 to 150 feet, depending on the specific machine. Their load capacity is between 500 to 1000 lbs.

Articulating boom lifts are powered by either internal combustion or electric engines. Indoor use is suitable for electric booms to prevent harmful fumes from polluting enclosed spaces.

The telescopic boom lift design is intended for most outdoor uses and therefore is suitable when powered by combustion engines. Operating manuals offer further guidance on the existing XCMG boom lifts for sale.

XCMG offers over 35 types of aerial machine platforms, such as the 20-58m telescopic boom lifts and the 15- 28m articulated boom lifts. The XCMG boom lifts meet aerial workload in various fields such as transportation, architecture, leasing, and communication. Click here to see boom lifts for sale near you.

XCMG articulated boom lifts have road adaptability and chassis mobility to meet the highest industry standards. Equipped with an axle balance system and tires, they feature a start and stop technology for better operation and mobility. Click here to see articulating boom lifts for sale near you.

The articulated boom lift satisfies the 14m MEWP requirements. It features a lubrication-free, intelligent control system. It is easy to operate and provides multiple options. Features include: 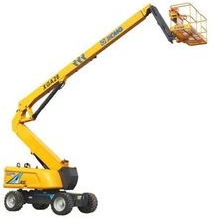 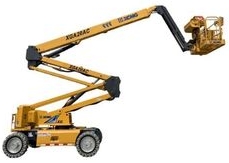 XCMG telescopic boom lifts for sale feature straight arms and self-propelled aerial functions with outstanding performance for easy and efficient operation. Some of the telescopic booms available for sale include: 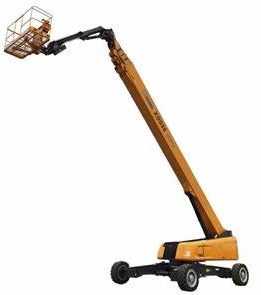 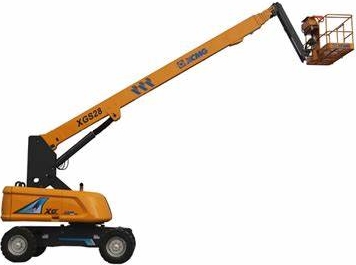 How high does an XCMG go?

The XCMG telescopic boom lifts can use hydraulic arms to move up and down and reach between 50 to 180 feet. The XCMG articulated booms can reach a capacity of between 40 to 150 feet, depending on the specific machine.

What is the Life Expectancy of an XCMG Boom Lift?

An XCMG boom lift can have a life expectancy of about 30 to 40 years if proper care and maintenance are adhered to. The versatility of the XCMG lifts offers customers a longer life span with easy performance and durability. The electro-hydraulic systems are efficient and fully equipped with user-friendly chassis mobility for easy operation. Boom lifts should always be inspected and serviced at least once annually to boost their performance.

Where are XCMG Boom Lifts made?

The XCMG’s brand essence incorporates engaging and innovative integration. Serving customers with over 400 customer care centers, customers can purchase machinery and equipment from the nearest dealers and outlets. If you are looking for an XCMG Boom lift for sale item , visit XCMG’s website for a range of options or contact one of their dealers and outlets worldwide to purchase a boom lift.

Click here to see Boom Lifts for sale near you.